In our continuing series on places we’ve stayed in the Airstream, I am proud to introduce Alexander Springs Recreation Area.

Unlike the previous Florida state parks we’ve blogged about, this campground is in a national park and therefore searched and booked on the federal portal. The park is located in the Ocala National Forest in north-central Florida which places it within easy driving distance of Orlando, Ocala and Gainesville.

Due to this urban proximity we found this park to be exceptionally busy and loud. As you might expect, most of the action takes place over the weekend as visitors let off steam, then it quiets down during the week. Despite the high traffic the park is quite expansive so we found one site for a week with no issues. Cell phone service was very strong and fast, which was a desperate relief from Manatee Springs.

Alexander Springs Recreation Area sits off of a relatively remote portion of Florida County Road 445, which winds its way haphazardly around the southern part of the Ocala National Forest. The drive is beautiful and surrounded on all sides by sand pine, and longleaf pine and numerous water features. The entrance is closed at night and secured with a code supplied at check-in time.

Pads were asphalt, campsites were very sandy and there were no services – though our loop had strategically placed water taps that could be reached with a long hose. We only stayed a week so we used the dump station on our departure day. There were a variety of bath houses placed centrally to most loops but no laundry facilities. Satellite reception was easy owing to the tall thin pines around camp.

As with Manatee Springs the primary reason we visited this park was the springs.

Alexander Springs is a first magnitude spring and produces 100 million or more gallons (378 million L) of fresh water daily. The water offers a constant temperature around 72 °F (23 °C) making it thoroughly enjoyable with our 3mm wetsuits.

Snorkeling the springs was very different from Manatee springs, which offered stairs and a steep approach to a relatively small body of water. Here the expansive body of water started warm, clear and shallow at the shore and stayed that way for quite a distance until dramatically dropping off into a deep abyss.

The spring itself gushes out of a violent gash in the underlying white limestone and offers endless diving opportunities and creature watching. A thick and vibrant forest of sea grass formed habitat right at this boundary attracting a wide range of fish and turtles. I spent quite a bit of time just zenning out to the complex light patterns cast on the waving grasses.

Alexander Springs offers a wide range of other activities including scuba diving, kayaking, hiking, bird watching and my favorite, mountain biking. Also serving somewhat as a study in contrast, though Alexander Springs is very busy it is also remote when it comes to groceries. We drove to Umatilla for fuel and groceries, which took well over an hour round trip.

The mountain biking at Alexander Springs was exceptional!

There’s a very well designed trail system connecting the Clearwater Recreation Area at the south edge of the Ocala National Forest to the Alexander Springs Connector Trail via two north-south running trails: The Paisley Woods Trail to the east and the West Trail to the, well – west.

There’s also a small connector between the Paisley Woods trail and West trail at the mid-point which breaks this trail system into a crude hourglass shape. This hourglass connector made these trails ideal for quick(ish) lunch-time loop rides, which I did every day.

The entire trail system bobs and weaves mostly between softwood longleaf pine and then playfully dips now and again into small hardwood clusters. 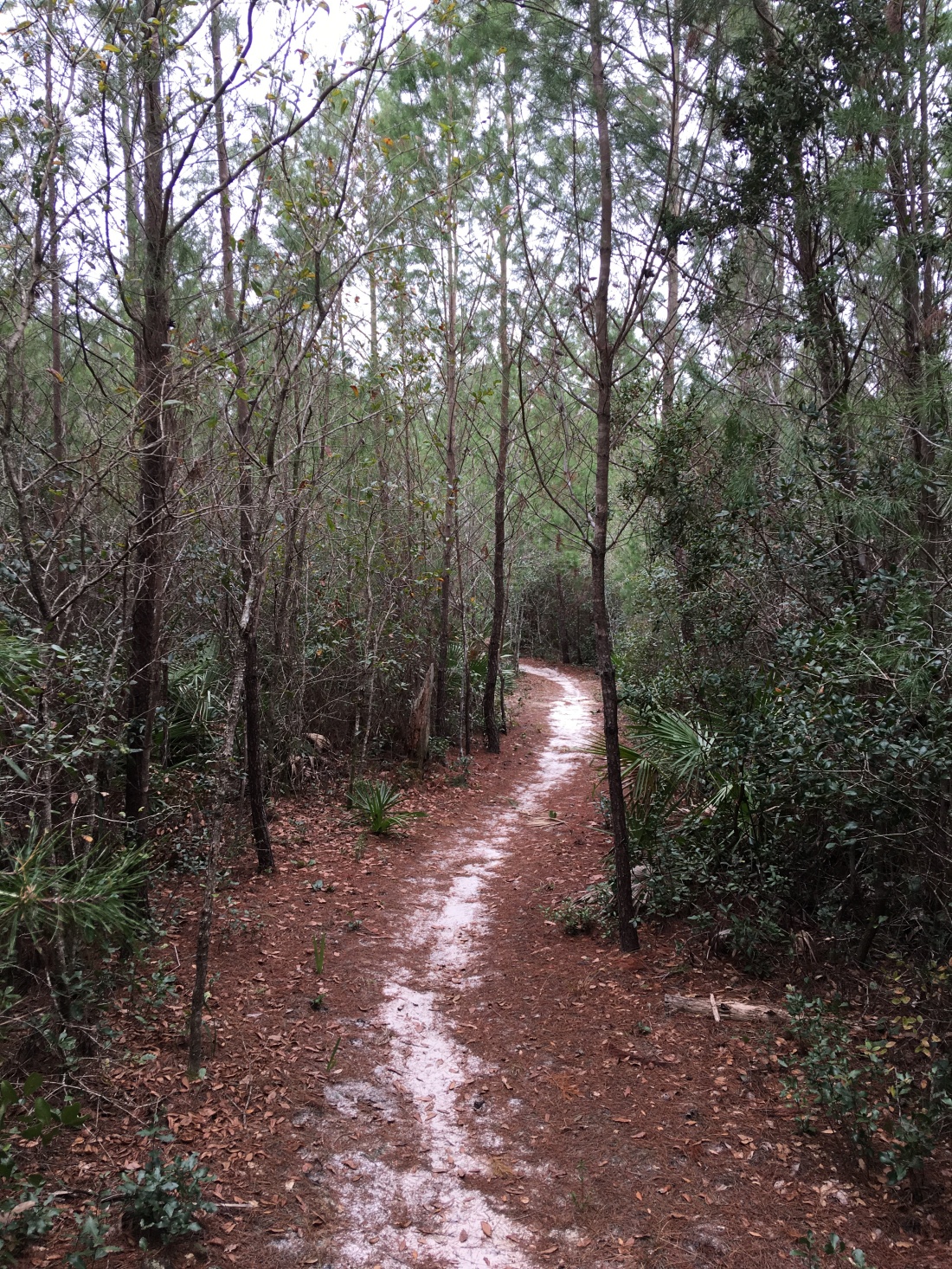 The trail was sandy single track and certainly would be best enjoyed on a 27+ or fat tire rig, but was still easily ridden on a standard 27/29 2.3″ tire. As with all my riding in Florida the trails we entirely bereft of riders. This was fine by me and allowed me to selfishly soak up my alone time with the forest.

On a parting note, one of the more amazing features of this trail system was the climbing, which you wouldn’t normally expect on a Florida ride. The trail glides among and ancient island ridge and you would be forgiven for thinking these were rolling hills belonging more appropriately to southern Arkansas. You won’t find intense climbing here of course, but it really was magical.

What Could Go Wrong

Strangely not too much went wrong at Alexander Springs, at least not RV-wise. Instead an unexpected family emergency forced us back to the desert southwest, so this was our last retreat in Florida.

As I mentioned previously, Alexander Springs was extremely busy and quite crowded on the weekends. But the water was enjoyable and the mountain biking the best we had in Florida. And jumping in the water after mountain biking, now that was priceless. I wouldn’t exactly say Alexander Springs has the “it” factor, but I definitely would say that about the mountain biking. That said, I would easily recommend staying here, or even anywhere close to the trails, the riding was truly amazing and left me wanting more.